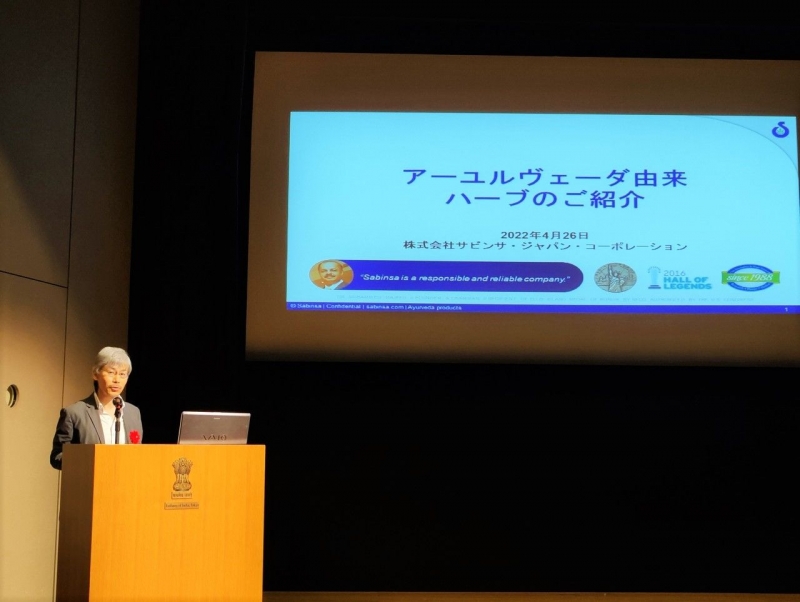 Sami-Sabinsa Japan recently participated in an event commemorating the 70th anniversary of India-Japan diplomatic relations at the Indian Embassy in Tokyo, Japan. As part of the anniversary celebrations, the Embassy celebrated Science Week from April 25-28, 2022 with participation of scientists, researchers, and students. April 26 was designated as "Ayurveda Day" and Sami-Sabinsa Japan, the marketing, sales, warehousing, and distribution arm of Sami-Sabinsa Group for nutraceutical and cosmeceutical products in Japan, was invited to participate.

Mr. Yoshiaki Adachi, Sami-Sabinsa’s technical staff in Japan, gave a presentation on Sami-Sabinsa’s key ingredients inspired by Ayurveda and expanded upon through modern scientific research, including Curcumin C3 Complex®, Bacopin®, Sabroxy®, and Saberry®, with ingredient samples and various finished products provided. The seminar attracted the attention of many people who attended the event, including journalists. The Japan Times published an extensive interview with Sami-Sabinsa Founder and Chairman Dr. Muhammed Majeed, ranging from company history, to patents, to the philanthropic efforts of the Dr. Majeed Foundation. Sami-Sabinsa also donated a complete set of books published by Dr. Majeed for the Embassy’s Library.

Sami-Sabinsa Japan has continuously increased its presence over the last 22 years, and is one of the forerunners of the industry in the Japanese market. The Representative Director of Sami-Sabinsa Japan is Mr. Hideyuki Sajimoto, and Mr. Sreelal M. M. serves as Director.

“We were pleased and honored to be part of the event marking the long relationship between India and Japan,” said Dr. Majeed. “Japan is an important market for Sami-Sabinsa, and we greatly esteem our clients and colleagues in the country.”

The seminar attracted the attention of many people who attended the event, including journalists.